Acharei Mot – Kedoshim: On Being a Holy Community

I’ve been surprised many times over these strange weeks by the sense of community that is available while I’m sitting in my living room. I live alone – just me and Nifal, my frolicking feline friend – and so days go by in which I don’t see another human being in person. And yet I am almost constantly with other people. I don’t just mean meetings, though there have been a great many of those, but also prayer services and learning sessions. I begin every weekday morning with Shaá¸¥arit, in which at least a dozen people are present with me via Zoom. Twice a week, I have a cup of tea with congregants from Mosaic Masorti (the oldest of whom is 100 years old, thoroughly proving that none of us are too old to learn Zoom!). Here we are, in the midst of a pandemic that requires us to stay at home, and we are managing to prove to one another again and again that we are a community. We have volunteers in both of my shuls reaching out, doing shopping trips for one another, helping one another to access the technology that is now so significant. I am incredibly proud.

In times of tragedy, we are often left wondering about the presence of God. I’m struck this week by that message in our double Torah portion of Aá¸¥arei-Mot – Kedoshim. Aá¸¥arei-Mot picks up the narrative again after the deaths of Aharon’s sons, Nadav and Avihu, who were struck down in the Tabernacle. Theirs is a strange story. Commentators have disagreed for thousands of years over precisely why they died. Aharon, their father, could only respond with silence. The Torah took a turn after the tragedy, brought us into the realm of purity and impurity, and now has gently guided us back to the narrative with the words (Leviticus 16:1):

‘The Eternal spoke to Moshe after the death of the two sons of Aharon, who died when they drew too close to the presence of the Eternal.’

Those are the words that give Aá¸¥arei-Mot its title. And that is all the Torah is willing to explain about the tragedy of Nadav and Avihu.

The second of our Torah portions gets its name from the following verse (Lev. 19:2):

‘You shall be holy, for I, the Eternal your God, am holy.’

When read in conjunction with one another, the title of this double-portion can be read as a phrase: Aá¸¥arei-mot, kedoshim. After death, holiness. After tragedy, we seek holiness. In the response to trauma, we seek to help one another heal; that is seeking holiness. We reach out to the community, provide one another with food, sit together on virtual meetings, create spaces for prayer and sharing – all of this is seeking holiness.

And to me, this all provides an answer to the question of where to find God: the Divine is found in the response. And it is important to me that after tragedy, holiness is brought by people – not simply found in the passive voice. It is sought and brought. It is active. ‘You shall be holy,’ says God – and ‘acharei-mot‘, after tragedy, we prove God correct. 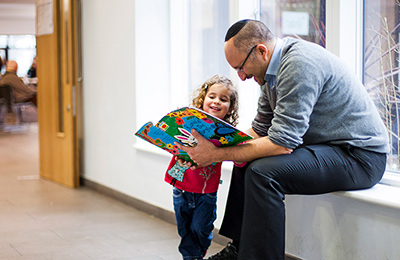