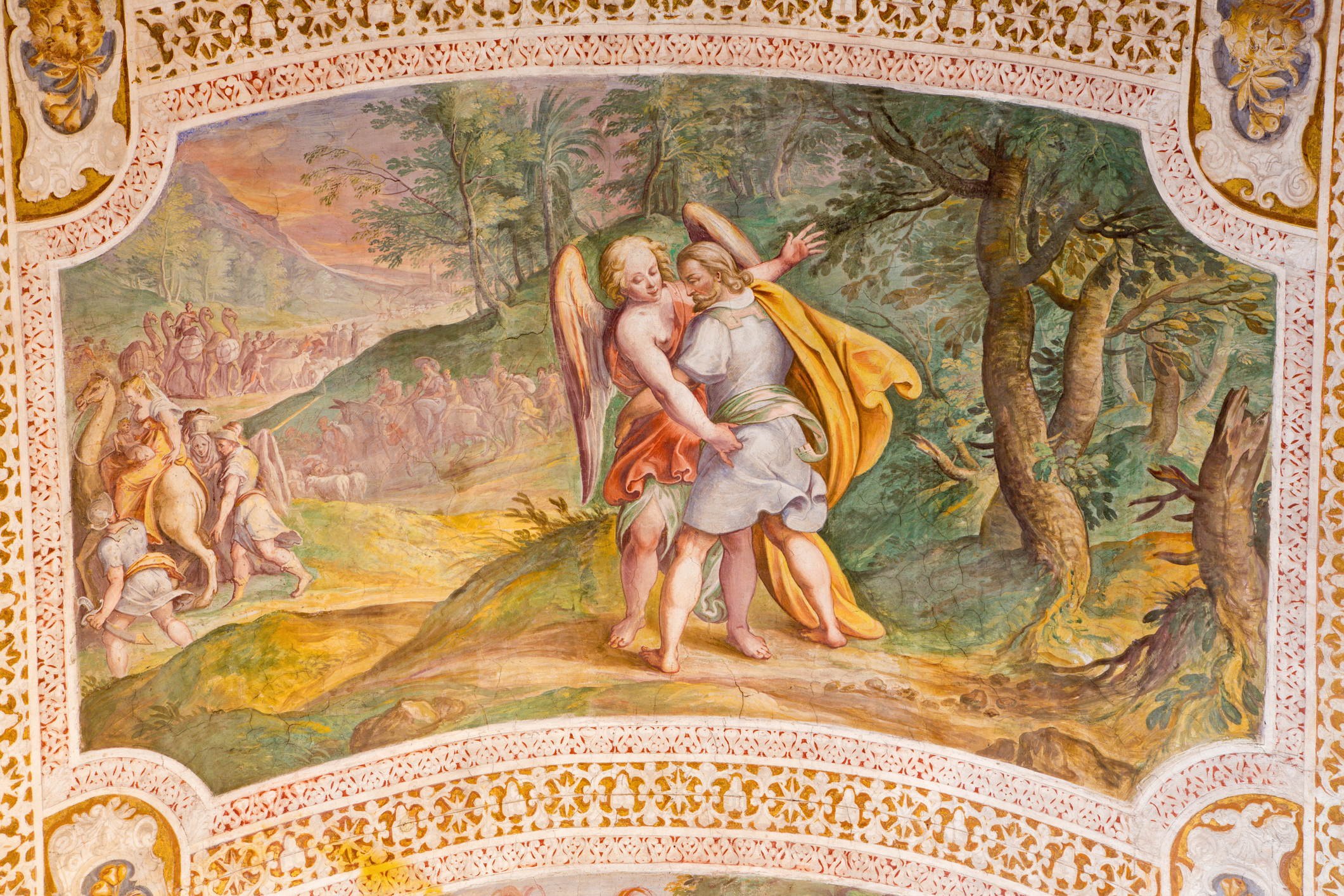 Families getting together is on most of our minds now. Our biblical family in Genesis had been split for a generation between Canaan and Padan-Aram, across the Euphrates in northern Syria where Laban lived. Now, after 20 years away, Jacob is coming home, and the three households (Jacob, Esau, and Isaac and Rebecca) will meet up once more.  Jacob crossed the Euphrates, and travelled 10 days towards Canaan, then met God’s angels at Mahanaim, identified as a crossing of the River Jabbok, which flows into the Jordan midway between the Kinneret and the Dead Sea.  So far, he had followed ‘the Kings Highway’ an ancient trade route that trails south from Damascus along the East of the Jordan.  At Mahanaim, he has two choices.  Do he and his family turn westwards, cross the Jordan and arrive at his parents’ home in Hebron?  Or go much further south to Seir, in Edom, to meet Esau?

The choice is significant. Is his first responsibility to his parents? When Jacob told first Laban and then his wives that he was going back to Canaan, he didn’t mention Isaac or Rebecca.  Did Jacob even know if his parents were still alive? We have no idea if there was any contact between the family; it is over 500 miles from Hebron to Padan-Aram, but it is possible that travellers along the trade routes carried messages. He might have wanted to get news about his parents from Esau, just as later Jacob is the object of Joseph’s immediate question to his brothers after he has revealed his identity:  ‘Does my father still live?’

Jacob may also have wondered whether his parents were still upset that their 20-year fraternal hatred was still festering.  Just as on Yom Kippur we must resolve our failures with our neighbours before we can deal with those sins with God, did Jacob realise he needed to patch up the relationship with Esau before seeing Isaac and Rebecca? Jacob was no expert in family relationships, and I wonder if he did understand what to do, but two verses before we read that he sent his messengers to Esau, we are told in Gen 32:2 that Jacob met with God’s angels. No details are given about the encounter, but I suggest that it was the angels who advised Jacob, as he immediately prioritises reconciliation with Esau over seeing his parents. The fact that he was so terrified by the prospect of Esau killing him and his family strengthens the significance of this meeting with angels. Jacob may have known of Esau’s silent threat in Gen 27:41 to kill him after Isaac’s death; perhaps he was reassured by the angels telling him his father still lived, and they could also have told him Esau’s location.

Moving past the account of the reconciliation with Esau, Jacob starts his journey towards his parents (Gen 33:17), via Succoth and the blood-stained encounter at Shechem.  Jacob is clearly in no hurry to see his parents – Rashi quotes midrash that this journey from Mahanaim to Hebron took well over 18 months. Then in Gen 35:8, we have what Robert Alter calls ‘a lonely obituary notice’: ‘And Deborah, Rebecca’s nurse died and she was buried below Beth-El, under the oak, and its name was called Alon-Bacuth (the oak of weeping)’. It’s puzzling because Rebecca’s nurse appeared only once before (unnamed), when she accompanied Rebecca from Haran to Canaan to meet Isaac (Gen 24:59). So why was Deborah with Jacob on his journey from Padan-Aram to Hebron? While her death is mentioned, Rebecca’s death is not noted anywhere. What happened to her? Rashi explains that Deborah was there because Rebecca was fulfilling a promise she made to Jacob as he was departing to Haran.  She told him, “I will send for you and bring you from there [and bring you home].”(Gen 27:45)   Sending Deborah to her son was her way of keeping her promise to Jacob.  While Rashi suggests she was sent just before the events in this sedrah, Nachmanides (Ramban) disagrees.  Back in chapter 27, Rebecca told Jacob he would not be long in Haran, and so Ramban suggests she sent Deborah there soon after he went there, but as Jacob stayed on in Aram, so did Deborah, helping his wives bring up their large family.

The midrash also has inventive reasons to explain away the lack of any mention of Rebecca’s death, due to the rabbinic antipathy to Esau.  According to Rashi, the time of her death was kept secret so that people would not curse her for having given birth to Esau, and so it was also kept hidden in the Torah.  The only hint is in the name of the oak Alon-Bacuth under which Deborah was buried; Bacuth is in the plural, and so denotes weeping for two women.  Ramban says Rebecca was buried by Hittites in Hebron as there was no family to bury her; Isaac was blind, Jacob was away, and Esau was still angry with her over her favouritism and her hatred of his wives.  The shame of being buried by Hittites meant her death couldn’t be explicitly recorded in the Torah.  The result is that when Jacob and his family, arrived at Hebron, only his blind father Isaac was there.

All these midrashim connect with the weaknesses of this biblical family.  Although Esau and Jacob were apparently reconciled and managed to bury Isaac together, this closing chapter of Rebecca and Isaac’s lives reflects their failures as parents, and how this family only came together in death.