The Origins of Dairy Foods on Shavuot

Sweetness drops from your lips, Oh bride; Honey and milk are under your tongue…” –Song of Songs 4:11

Cheesecake or ice cream?  Long before cheesecake or ice cream were invented Jews ate dairy foods on Shavuot, but the origins of the custom are unclear.  Unlike Passover when we are commanded in the Torah to eat matzah to commemorate the liberation from Egyptian bondage or Sukkot when we are commanded to live in sukkot to commemorate God’s redemption of the Israelites, the consumption of dairy on Shavuot is not a commandment in the Torah.  Likewise, it does not appear as a custom of the Talmudic sages.  The custom of eating dairy on a festival also contradicts a halachic adage, “there is no joy without meat and wine”.  What are the origins of this custom and why do we eat dairy on Shavuot?

The first fruits festival in the Torah marks the gathering of the barley harvest and when Israelites ascended to the Temple to offer sacrifices in thanksgiving.  After the destruction of the Temple, Shavuot came to be associated with the giving of the Torah at Mount Sinai. The entire experience of God’s revelation and the Israelites’ receiving Torah created a host of associations about the encounter.

Rabbi Aaron HaCohen of Lunel in his work Orhot Hayyim (Provence, early 14th century) associated the custom with a verse from the Song of Songs: “Sweetness drops from your lips, oh bride; honey and milk are under your tongue…” (Songs 4:11).The romance between the lovers of the Song of Songs is considered an allegory of the relationship between God and the Jewish people and, on the day that we commemorate the giving of Torah at Sinai and Israel renews its relationship with God, it makes sense to associate the Shavuot dairy custom with this verse.   Again, this is a midrashic explanation of an existing custom. The mystics found another explanation for the custom through gematria: the Hebrew word for milk is equivalent to 40, the number of days which Moses spent on Mt. Sinai receiving the Torah.  Another explanation was introduced in the 19th century, pointing out that since the Children of Israel learned the laws of kashrut at Sinai after the theophany, they did not have kosher utensils to eat meat so they ate dairy dishes instead.

By the 16th century the Shavuot dairy custom had spread throughout Europe.  Rabbi Moshe Isserles writing the Ashkenazic customs in the Shulchan Aruch, wrote: “It is a universal custom to eat dairy food on the first day of Shavuot.  The reason appears to be that just as on the night of Passover two cooked dishes are taken in remembrance of the paschal sacrifice and the festival offering, so one should eat a dairy dish and then a meat dish [as a reminder of the two sacrifices offered on Shavuot]” (Orah Hayyim 294:3, trans. Philip Goodman, The Shavuot Anthology, p. 249). Rabbi Isserles recognises an inherent problem with the custom, how do Jews eat dairy for Shavuot and meat for the festival if the laws of kashrut prohibit mixing the two?   His contemporary, Rabbi Isaiah Horowitz addressed the problem and recommended that on the first day of Shavuot one should eat a dairy dish first, eat a bit of bread to clean the palate, say Birkat HaMazon and then wait an hour before continuing the celebration with a meat meal on a fresh tablecloth.

The simplest explanation is the most plausible.  Rabbi Golinkin cites Jeffrey L. Singman’s book, Daily Life in Medieval Europe (1999), as support for the practice: calves were weaned in the spring, consequently dairy products were abundant at Shavuot.  The rabbinic explanations bolster an existing custom which is neither supported in the Torah nor the Talmud.  Unlike many Jewish traditions transmitted from the sages the Shavuot dairy custom developed through the daily life of the Jewish people.  Even today community groups continue to reinvent the custom with ice cream socials and cheesecake bake-offs.

Although the homiletical explanations for the custom are forced, the rabbis who developed them lead us to ask questions about the meaning of Shavuot for ourselves.  As we experience the festival, are we like the lovers of the Song of Songs endlessly seeking to connect with God?  Do we experience awe as the Israelites did when they witnessed the thunder and lightning at Sinai?   Do we feel the sense of gratitude like those who ascended to the Mishkan to offer thanks for a good harvest and the blessings of the first fruits?   How do we make Torah a source of sweetness in our lives? 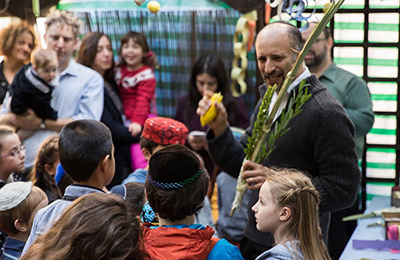