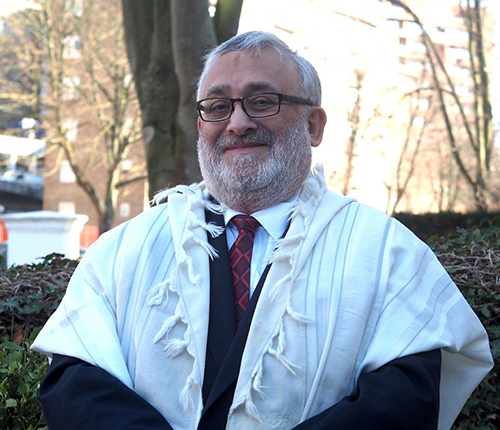 Stephen Cotsen joined New London as a member in 1996, having long been an admirer of the writings of Rabbi Dr. Louis Jacobs. He soon became Head Teacher of the Cheder and gradually took on extra responsibilities for communal activities. In 1999, when Chazan George Rothschild retired, Stephen was invited to become the full-time Chazan and Community Director of the Synagogue, a role he held until November 2012, when he left to return to Cardiff to care for his family there.

In 2018, following the departure of Cantor Jason Green, Stephen was invited back to New London, where he is once again the Chazan, with added responsibility for the B’nei Mitzvah journey of our younger members. His responsibilities also include nurturing service leaders within the community, and helping with pastoral work.  He is employed on a half-time basis at NLS, and also works as a private tutor.

Stephen studied Chazzanut first with the late Chazan Tzvi Finkelstein in Cardiff and then at Jews College London, under the late Chazan Leo Bryll. He was formally the Chazan at Brixton, Hackney and Mill Hill Synagogues (United Synagogue).

Stephen also brings many years of of communal experience to the Synagogue. He was a Youth and Community worker in the 1970s, at the Brady Club in Whitechapel, Victoria Club in Stamford Hill, and South London Jewish Youth Centre. From 1977-9, he was Executive Director of the Brighton and Hove Jewish Community Centre.

From 1980 – 1985 he was Jewish Education Director at the Association for Jewish Youth, and then Executive Director of Jewish Child’s Day from 1985-7.